Dog having a Seizure

Joined 1 mo ago
·
8 Posts
Has any one on here every had a dog too have a seizure ? And if so what can you do for one not too keep having them ?
B

Joined Feb 10, 2018
·
3,386 Posts
How old is the dog and was this the first one ? Diet does play a big role in a person’s and animals life . Others thing to look at are , did it happen after a medication are while running . Those are the easy things to control and change to try and stop them . Seizures are one of the hereditary faults in beagles .

Joined Sep 15, 2016
·
1,560 Posts
I had a female that had seizures. The vet at the time said that if they were infrequent to just watch them. If they got frequent or lasted more than a few minutes she would need medicine . That dog got spayed. She would seize from time to time , but never enough to where she was treated for them.

Joined Apr 23, 2018
·
653 Posts
Had a couple here with a problem, vets could not help medicated heavy when they get hot then they fall out, change the address and the problem is solved, I didn't sell them I gave back where I got them.

Joined Jul 12, 2010
·
143 Posts
BE certain its an actual seizure. I have seen at least 3 hounds Have "seizures" that were nothing more than their collar a litle too tight. If they're running hard especially in heat and humidity they need all the oxygen they can get. It does not take a collar being but just barely too tight to cause this problem. You will not know it until they;re running. even playing in the back yard. won't cause it. Just try it. don't cull a good hound for your mistake. If once their collar is loosened it still persists.. then do what you need.
D

power said:
BE certain its an actual seizure. I have seen at least 3 hounds Have "seizures" that were nothing more than their collar a litle too tight. If they're running hard especially in heat and humidity they need all the oxygen they can get. It does not take a collar being but just barely too tight to cause this problem. You will not know it until they;re running. even playing in the back yard. won't cause it. Just try it. don't cull a good hound for your mistake. If once their collar is loosened it still persists.. then do what you need.
Click to expand...

I have one just turned 3 she has had a couple seizures. Strange part only had them when she was on next guard. Took her off per vet. None since. Listed as a side affect.

Joined Dec 3, 2012
·
3,981 Posts
Seizures are a terrible monster they can be caused by many things food, hereditary, or a reaction, actually had a little female that was having them after turning 3 years old, couldn't figure it out took her to the vet he removed an abscess behind her eye she never had one again, kind of tough figuring out what causes them sometimes you never find out
R

Joined May 28, 2011
·
3,675 Posts
A lot of seizures - called sugar fits by some people - are related to diet. Another cause is just getting too excited when released. The later will only last a little bit and the hound will join back in for the rest of the day. My experience is the first one is the one to watch. I would make a vet call to run a blood test. If it is diet the vet should be able to tell you what you need to do to adjust it and correct the problem.
F

Joined Jan 2, 2014
·
4,151 Posts
A lot of the fits / seizures are genetic and a Vet should be contacted. When the dog has a petite mal seizure its not to bad, if they have a Grand Mal seizure that is definitely a cull or a vet visit for medication. The grand mal seizure occurs when the dog lays on its side, panting heavily and acts like its running while laying on the ground, its is called paddling with that movement. Lots of panting and takes a while to stand up let alone getting their orientation back, 20-40 minutes each time when having a seizure.
I had a brother and sister that were OK gun dogs but I found each of them at least 3 times having a grand mal seizure. Both times I changed food, eventually both of them were culled, no reason to breed the female or use the male. Do not like the genetics. JMHO
P

TaterNort said:
Power, what where the actions of the dog with the collar too tight?
Click to expand...

Noticed fat first one of my strongest hounds wasn't with the pack and then came in a few minutes later. Then about 10 minutes later on a check I noticed he staggered and was laboring to stand. By the time i covered 20 yards he was on the ground with a foaming mouth and shaking hard. wild eyed. Very disoriented. Just trying to give what I thought was a dog having a seizure relief , I undid his collar. Instantly his tense shaking body relaxed and within `10-15 seconds was on his feet. I got hima drink and loaded him in dog box. never had another.
Had another male do the same. /granted I dont put collars on that tight. He laid down , couldn't stand. This was before the previous hounds story. I did'nt figure out until later. I retired his collar because of wear. And never had another "seizure"
was letting a friend try a female out. i hadn't had her long. he hsaid she would stop running after awhile. and even lay down and pant heavily "like a seizure" .. I told him to try loosening her collar. no issues now , he ran her all summer and bought her.
M

Day-old beagle puppies
The typical longevity of beagles is 12–15 years,[43] which is a common lifespan for dogs of their size.[44]

Beagles may be prone to epilepsy, but this can often be controlled with medication. Hypothyroidism and a number of types of dwarfism occur in beagles. Two conditions in particular are unique to the breed: "Funny Puppy", in which the puppy is slow to develop and eventually develops weak legs, a crooked back and although normally healthy, is prone to a range of illnesses;[45] and Musladin-Lueke syndrome (MLS) in which the eyes are slanted and the outer toes are underdeveloped but otherwise development is as normal.[46] Hip dysplasia, common in Harriers and in some larger breeds, is rarely considered a problem in beagles.[47] Beagles are considered a chondrodystrophic breed, meaning that they are prone to types of disk diseases.[48] 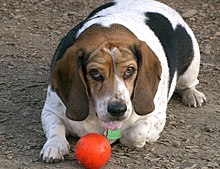 Weight gain can be a problem in older or sedentary dogs, which in turn can lead to heart and joint problems.
In rare cases, beagles may develop immune mediated polygenic arthritis (where the immune system attacks the joints) even at a young age. The symptoms can sometimes be relieved by steroid treatments.[45] Another rare disease in the breed is neonatal cerebellar cortical degeneration. Affected puppies are slow, have lower co-ordination, fall more often and don't have a normal gait. It has an estimated carrier rate of 5% and affected rate of 0.1%. A genetic test is available.[49][50]

Their long floppy ears can mean that the inner ear does not receive a substantial air flow or that moist air becomes trapped, and this can lead to ear infections. Beagles may also be affected by a range of eye problems; two common ophthalmic conditions in beagles are glaucoma and corneal dystrophy.[51] "Cherry eye", a prolapse of the gland of the third eyelid, and distichiasis, a condition in which eyelashes grow into the eye causing irritation, sometimes exist; both these conditions can be corrected with surgery.[45] They can suffer from several types of retinal atrophy. Failure of the nasolacrimal drainage system can cause dry eye or leakage of tears onto the face.[45]

As field dogs they are prone to minor injuries such as cuts and sprains, and, if inactive, obesity is a common problem as they will eat whenever food is available and rely on their owners to regulate their weight.[45] When working or running free they are also likely to pick up parasites such as fleas, ticks, harvest mites, and tapeworms, and irritants such as grass seeds can become trapped in their eyes, soft ears, or paws.[52]

Beagles may exhibit a behavior known as reverse sneezing, in which they sound as if they are choking or gasping for breath, but are actually drawing air in through the mouth and nose. The exact cause of this behavior is not known, but it can be a common occurrence and is not harmful to the dog.[53]

Birth and Reproduction[edit]
The average size of a beagle litter is six puppies. When mother beagles give birth to litters of puppies, the little pups weigh just a few ounces each.[54]

The beagle has an even temper and gentle disposition. Described in several breed standards as "merry", they are amiable and typically neither aggressive nor timid, although this depends on the individual. They enjoy company, and although they may initially be standoffish with strangers, they are easily won over.
M

Joined Jan 2, 2014
·
4,151 Posts
In your health post how did you get a picture of my champion beagle with her ball. I usually throw the ball and she waddles towards it and lays down next to it. It has taken some time to teach her that skill. JMHO
1 - 16 of 16 Posts
Join the discussion
Continue with Facebook
Continue with Google
or sign up with email
About this Discussion
15 Replies
13 Participants
Last post:
Foxxy 7 d ago
Rabbit Dogs
A forum community dedicated to rabbit hunting beagle owners and enthusiasts. Come join the discussion about breeding, health, behavior, housing, adopting, care, supplies, classifieds, and more!
Full Forum Listing
Explore Our Forums
The Tailgate Rabbit Hunting and Beagling Breeding, Bloodlines, and Pedigrees Pictures Beagle Health
Recommended Communities